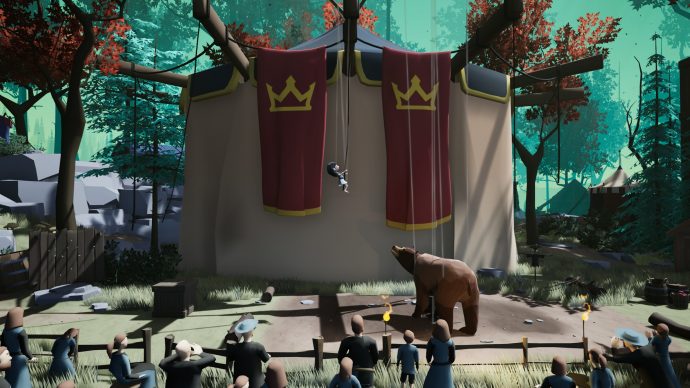 Screenshot Saturday Sunday: a day to beat the drum for indie developers bravely sharing their projects with an often cold and uncaring internet on Twitter. You gotta respect such bravery. This week I’ve brought you round cats, MS Paint horror cards, and quietly crying mecha. Let’s get to it!

You might remember Calico, a game about magical girls running a café in the middle of the woods, from some viral nonsense about wearing cats on your head. Well, the diabolical minds at Catbean Games have done it again.

But then, what else would one do with a cat so absolutely round? There’s much to consider in this little clip, from the additional feline friend concernedly following this circus act to the oblivious background character. They look to be summoning one of those crossroads devils you hear about in blues music. If rotund pets are your fancy, maybe wishlist the game on Steam.

What’s the antidote for too much magical girl feel goodery? Some new still from 1-bit horror adventure World Of Horror might do the trick.

Described by the developer as a melding of cosmic horror and Junji Ito, these scenes evoke a range of emotions from wary unease to skin crawling anxiety. The art style does that awful trick of letting your mind fill in the details between bits, and mine needs a stern scolding right about now. Keep an eye on the growing threat on World Of Horror’s Steam page.

Have you ever witnessed an animation that looked as if some imperfect pilot were behind the controls. In A Juggler’s Tale, that’s all intentional since its characters are performing a puppet theatre.

The manic head bobs and noodly arms sell the fiction well, but don’t miss out on appreciating the strings as they pull taut and loosen with each movement. According to the game’s website, not all scenes will be so picturesque, but consider me fairly enchanted nonetheless.

I’m cheating a bit with this last one since it was technically posted last weekend, but so what? I make the rules around here. I can post cool mecha battle screenshots all day.

Star Renegades manages to convey a lot in one short clip. Who is that big crying robot? How long has it lay there as nature gradually claimed its corpse? I didn’t really notice the metallic lads posting up in the foreground for a couple of loops, which is a compliment to the art design. Massive Damage’s tactical robo rogue-lite is scheduled for sometime next year, and you can read more about it on their Steam page.